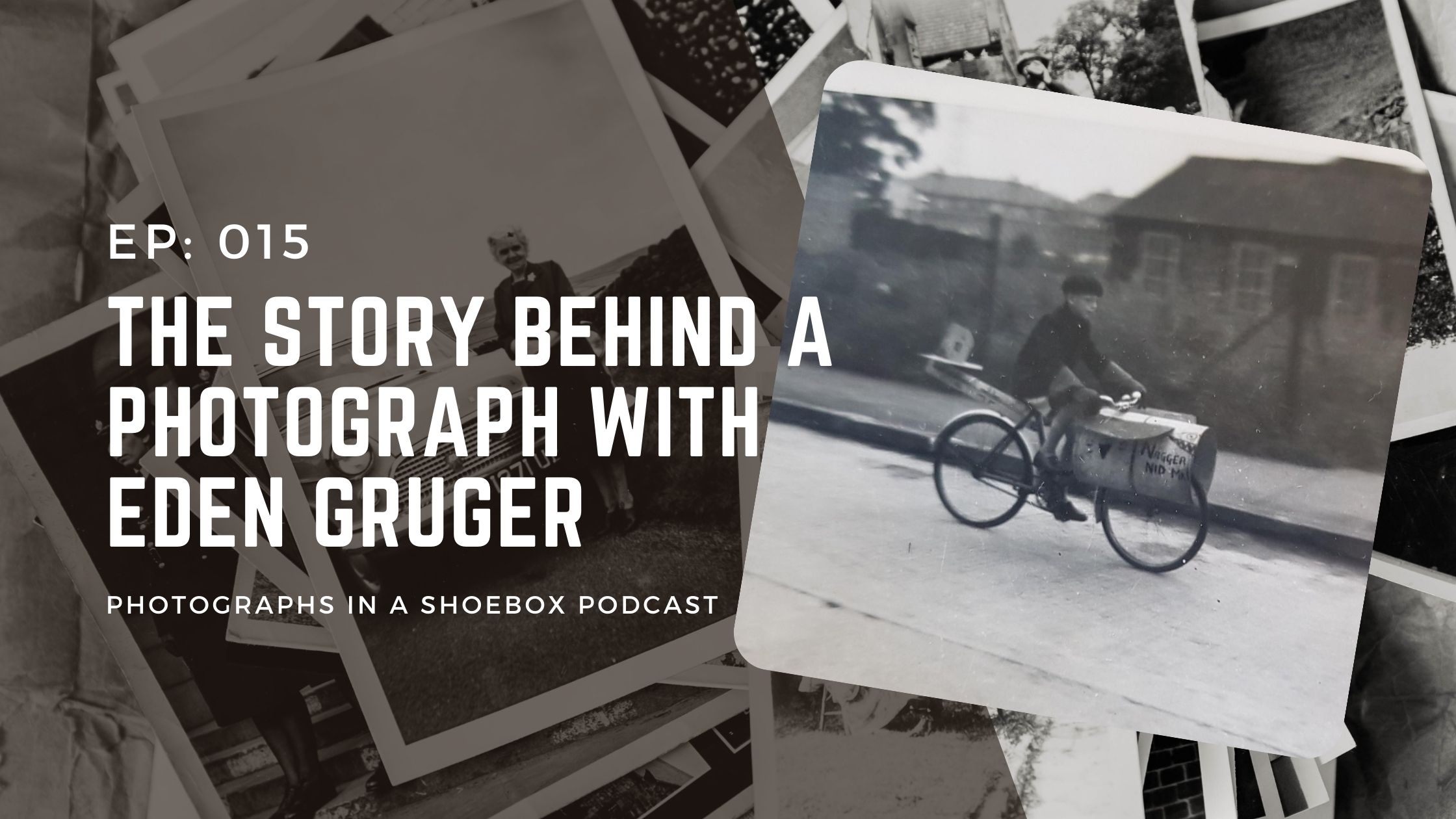 Ep 015 The Story Behind the Photograph with Eden Gruger

Listen to The Story Behind the Photograph with Eden Gruger here:

As a photographer, I love hearing the story behind a photograph, and in this episode, I am joined by author Eden Gruger chatting about a photograph of her father taken when he was a young boy after he’d converted his pedal bike into a plane. As you do!

Eden is an author, speaker, writer, and publishing mentor, she lives just outside London, in the surprisingly green Essex, with 2 dogs, 1 part-time cat, and a full-time husband. An eclectic mix of expert knowledge and unicorn wellington boots.

Transcription of The Story Behind the Photograph with Eden Gruger:

Sue: (00:02)
Hello and welcome to the Photographs in a Shoebox podcast with me, Sue Kennedy. This podcast is all about helping and inspiring you to tell your family’s story in pictures.

Sue: (00:19)
Today, I’m chatting with Eden Gruger about her treasured photograph, a copy of which you’ll find in the show notes. Let me introduce Eden to you. She’s an author, speaker, writing and publishing mentor and she lives just outside of London in a surprisingly green area of Essex with two dogs, one part-time cat and a full-time husband and an electic mix of expert knowledge and unicorn Wellington boots, as you’ll find out when you listen to the rest of this interview.

Sue: (00:52)
Hello, everyone. Today I’m with Eden and we are chatting about a fabulous photograph she has got from her history. If we just kick off, why don’t you tell us a little bit about yourself, Eden, and then we’ll talk about the photograph.

Eden: (01:07)
Hi, Sue. I’m Eden Gruger. I’m an author. Currently have two women’s fiction … comedy fiction … darkly comic fiction books out; Down with Frogs and Laughing at Myself. When I’m not doing that, I coach writers and authors through the process of writing, publishing, marketing and PR-ing their own books.

Sue: (01:49)
Yeah. That’s what we’re here to talk about; the story behind your photograph.

Eden: (01:57)
As soon as you said about this podcast, I knew exactly the photo I wanted to speak about. It’s a photograph of my dad and we think he’s about 10 or 11 years old and he’s entered a fancy dress competition for the Scouts, we think. And he’s turned his bicycle into an airplane so the photograph is him riding his bike airplane along the road to the competition.

Eden: (02:55)
We don’t know. We can’t remember who took it. But yeah, he definitely … He actually … When we were talking about it, he remembered so much about when they were building the airplane and what the different bits were actually made from and which one of his brothers helped him with which part. Yeah, it really opened up a whole experience.

Eden: (03:35)
Actually, my dad being my dad, what he probably did was he probably ate them really slowly and squared them away. Yeah. He probably did. I did ask him, did he remember what sweeties he bought or … but he couldn’t remember that end of it. But yeah, knowing my dad he would have hidden them from his brothers and his sister and eaten them really, really slowly because that’s what he’s like.

Eden: (04:19)
No. Basically, across the front wheel is a barrel and that, apparently, was … Potatoes used to come in a barrel.

Eden: (04:32)
Yeah. So, it’s an old potato barrel and then across the barrel, through the barrel, is a plank of wood which is the wings. And that was a bit of wood that they found in the shed. And then he’s got a tail, which is made out of … I’m trying to see. It’s like a … It’s not wood but it’s not … Obviously, they didn’t have so much plastic and stuff, especially my dad didn’t …

Eden: (05:06)
… Evolve with plastic until much later. It’s kind of like molded paper and then it sticks up in the back and then it’s got a little tail fin, what it …

Eden: (05:30)
Absolutely. This is enough reason why I love the photo because this is so my dad. He’s very Heath Robinson. He will turn something out of what seems to be absolutely nothing. If you give him a few random bits of junk then you’ll have who knows what of that. In lockdown, I kept getting calls saying, “Oh, I’ve made you a wellies scraper,” and, “Oh, I’ve made you this and that.” It’s just …

Eden: (06:05)
One for each foot. Well, he gave them to everybody that he knew that might wear wellies. And it’s also got a little hook … handy hanging hook … so that you can hang it so you don’t trip over it. To be honest …

Sue: (06:28)
So this photograph really just sums up your father for you, I guess?

Eden: (06:37)
He does. He does. It’s one of those photographs that is just so full of the character of the person that’s in it you can’t not smile.

Eden: (07:11)
No, not at all. Not at all. There are so many photographs of my dad just … He actually … My granny taught him to knit when he was a small boy and there’s loads of photographs of him arsing around, sitting in the garden hunched up in a little chair with a tea cozy on his head doing his knitting like some little old lady. I just don’t think he was born with that shame gene. He just doesn’t care. He’s just like, “Yeah, I’m just having a laugh.”

Sue: (07:42)
Yeah. And quite forward thinking to teach him knitting.

Eden: (07:45)
Yeah. Yeah. Definitely. Definitely. My dad was a geek a long time before geeks were fashionable and my mum always used to say, “Why did your mum make you wear turquoise sweaters and mustard sweaters? Everyone else was wearing grey and black and there’s you standing out.” And one day my dad said, “What makes you think that she was making me wear those colours? I chose them.” And she he really was ahead of his time. Everyone else was in that monochrome and my dad was like, “La, la!”

Sue: (08:26)
It’s fascinating to hear the story behind the photograph. I will share a copy in the show notes.

Sue: (08:38)
That’s all for this episode. Don’t forget to subscribe wherever you are listening so you never miss an episode. Thanks for joining me today. Bye for now.