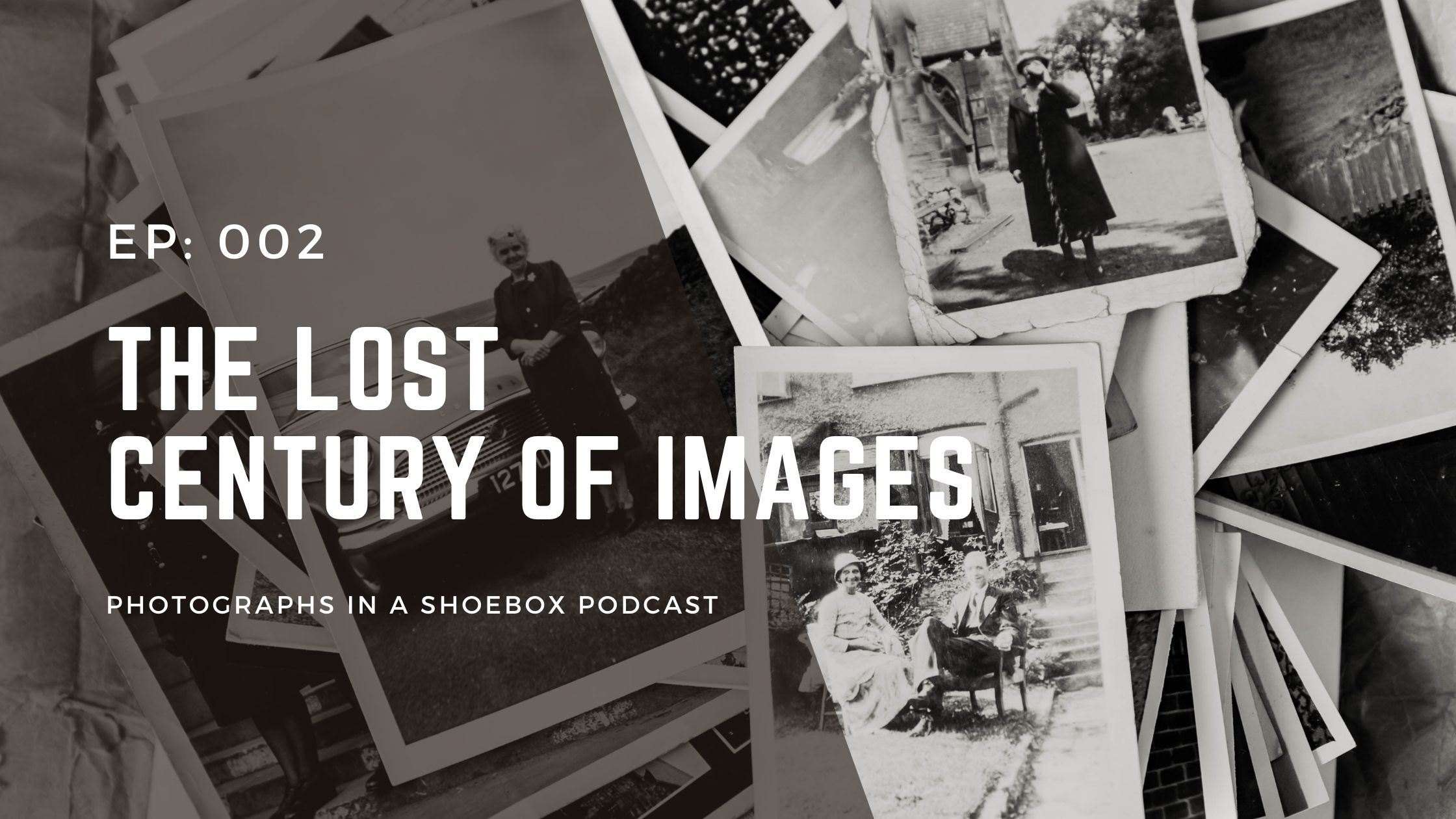 Today, we’re talking about the lost century of images.

It’s a phrase I first heard about six years ago at a trade show, and I think it’s probably become true.

What I tend to find is that most photographs we take nowadays are just not printed. They’re not stored anywhere else but on the device, they’re taken on, so when the technology breaks, expires, or is lost, those pictures are gone forever.

Sue: (00:10)
Hello, and welcome to Photographs in a Shoebox Podcast with Sue Kennedy.

Sue: (00:17)
Today, we’re talking about the lost century of images. It’s a phrase I first heard about six years ago at a trade show, and I think it’s probably become true. What I tend to find is that most images we take nowadays are just not printed. They’re not stored anywhere else but on the device they’re taken on, so when the technology breaks, expires, or is lost, those images are too. They’re just gone forever.

Sue: (00:48)
It’s weird I guess that on the one hand our children are probably the most photographed generation in history, and we upload and share plenty of images across social media. It’s kind of a quantity over quality problem. Whereas printed photographs, when they’re preserved properly, will stand the test of time. Digital files certainly won’t. There’s going to be, I think, a huge amount of digital information that’s just going to be lost just because the technology used to produce it has become obsolete, so the computer of tomorrow may not be able to read the photos of today, or you just get hit by a piece of malware or a nasty virus and your computer can’t be salvaged. That’s not something that would happen in the good old days when you had photographs in a shoebox, or you had photo albums on your bookshelf or photographs on the wall. That historical record of your family was preserved.

Sue: (02:02)
I know our lives are busy and that printing these images is something that gets overlooked quite often, or it’s simply a case of not understanding how to download the photographs. I think we’ve all been there. In days gone by we’ve uploaded our holiday snaps to social media and then done nothing more with them. We haven’t printed them. We haven’t put them in a photo album. We haven’t created a collage to the wall, and just eventually we forget about them.

Sue: (02:33)
I guess it’s the same with our children as well. We take lots of photographs as they hit all the milestones. We might share one or two online, and then we forget about them. I suppose the challenge over recent years is there’s been a mood change and we’re not as keen to broadcast children’s activities on social media. So it’s kind of a double whammy, isn’t it? Because we’ve taken the image, but then we’ve not shared it, so it’s not going to pop up on our memories in three years’ time. It’s not going to be in the shoebox or in an album because we haven’t got around to printing it, and we may not have a backup of it because we haven’t worked out how to download it.

Sue: (03:21)
So I reckon there’s probably millions of photographs each year that are forgotten about, or they’re lost on accounts to which we’ve forgotten the passwords to. You might have set it up with a different email to one you regularly use, and then it’s gone, isn’t it? Or it’s on a hard drive that you’ve lost the cable for, or it just stopped working. I’ve had that with hard drives. They have a lifespan probably of two to three years, and then they can be inaccessible if you’re really unlucky. But that means if we can’t access them, then future generations can’t either and we’ve lost that social history, that piece of social history is gone.

Sue: (04:02)
Now, I know it’s a mammoth time-consuming job to edit the photographs that you might still have access to. I guess it’s a bit like baby books. You start off with all these really good intentions, and I think most of us have still got a half finished one knocking around, but it’s still nice when we discover them even if it is half finished. It’s the same with photo albums on the bookcase. It’s lovely to pick one up. It’s a bit like wrapping yourself in a comfort blanket. You’re transported back in time. Your children or your siblings are just loving seeing this family history to be rolled out, especially if you’ve got older or younger siblings, they might remember more than you.

Sue: (04:53)
I think today, we’ve almost ironically, barely got any (printed) photographs of our children. We might buy the school portraits, but increasingly they’re only available as a digital copy. We might have baby photographs that we’ve printed, but we tend to miss huge chunks of childhood out.

Sue: (05:17)
That’s one of the reasons I started to journal, not quite a photograph every day, but if we did something that was a fun family activity that I might not want to share on social media, but I wanted to keep a note of it, then I found an app for my phone, I could just upload the picture to, put a sentence of words alongside it, and then each year I would get that book printed. We’re probably about five years down the line with that. My daughter loves looking back. It’s a good memory jogger for her because she was little and she doesn’t always remember things, so it’s nice to sort of reminisce with her. Sadly she has lost (some) grandparents. There are pictures of them in there so she can remember them, remember the happy times.

Sue: (06:16)
So in the days before digital cameras, photographs naturally aged, faded and wrinkled in parallel with the person who took them almost. That was the natural order of things, but you could still look at them and enjoy them. It’s kind of evolved now. We don’t seem to have the same respect for the virtual image or the digital image as something tangible, like a little photograph that you can hold. So by the time we realize its value, it’s often too late.

Sue: (06:48)
There was something about getting a film developed and picking it up a week later. I know that makes me sound old, but there was. You would generally pick out the best and put them in an album, and the rest got stored back in their little envelope and usually got put in the shoebox. But can you imagine if we’d not bothered to develop that film, pick out the best, and we just opened the box of used but undeveloped films, we just wouldn’t know what to do with them. You can almost see the same thing happening with hard drives and USB sticks. That’s if we can even access them.

Sue: (07:25)
That brings me to what it means to our children. It seems to me that children love photographs and the time spent together as a family looking at them. That in itself can build amazing memories. I think the process of seeing themselves in photographs connects them to their family history in some way. They know that they’re loved, which is just as important, I think. That I’m told or I’ve read, there’s certainly a lot of research around this, has a huge, positive impact on their self-esteem, and who doesn’t want that for their children.

Sue: (08:07)
That’s it for this week. I hope you’ve enjoyed this week’s discussion. Don’t forget to subscribe wherever you are listening so that you never miss an episode. Until next week, bye-bye.