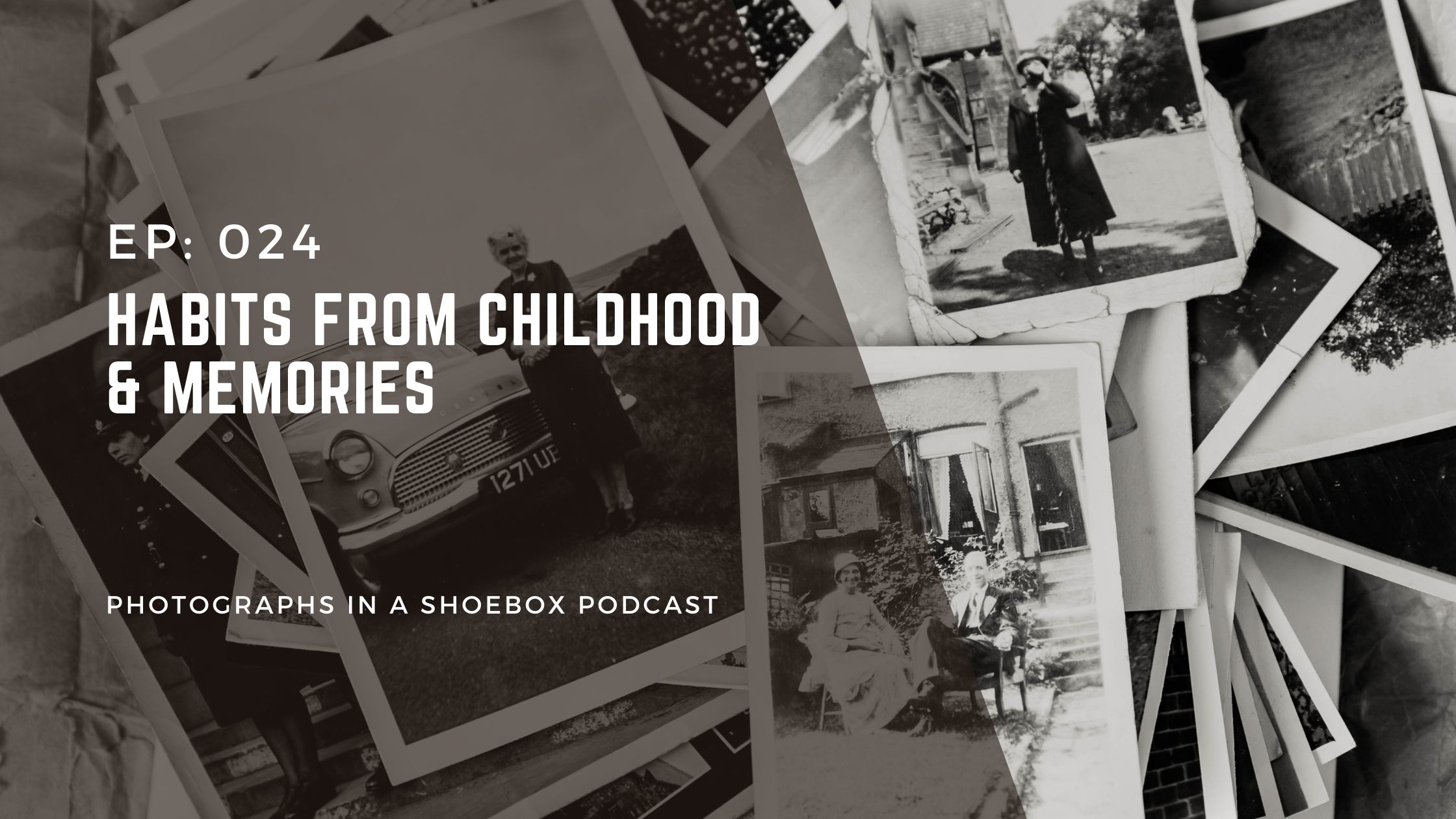 What habits do you still have from childhood? I’m thinking in the context of making memories here. And existing in family photos. And have you continued to make the same memories for your children?

In this episode, I wanted to consider what habits do you still have from childhood?

Now, I’m thinking of this in the context of making memories. Common childhood memories are perhaps the tooth fairy visiting, birthday parties, holidays, your first day at school, those sort of things. And my question to you is, do you have photographs of these memories? Possibly not the tooth one, but I would imagine that you have something from other key life events. I hope so!

Generally, I think that the more joyful an experience is, the more likely we are to repeat it. Whereas something that generates an argument gets linked to that experience and you naturally avoid it.

Sometimes, I find this bad experience association will pop up in my photography studio, typically a parent, usually the mother, will come in and say she doesn’t want to be in the photographs with her baby.

I don’t ask too many questions because that would just be nosey. But I know from my own experience that we all tend to say that, we always say that we look awful in photographs and we hate having our photographs taken. Very few people would say otherwise if I’m honest. But what I’ve learned as a professional photographer, that sometimes it’s simply about time, as in the time to take the photograph.

So a quick snap is rarely going and to give you great results, not consistently anyway. Angles matter, shooting up people’s noses is rarely flattering, but some people think that’s how it’s done or that they have to pout. I have no idea why either.

Posing is the key

It’s the same with posing. There are ways to pose somebody that are more flattering than others, and as a photographer (as you train) you get to know what works with people, and what works with different sizes of people. And it’s not the same for a man as it is for a woman. So I won’t give you a whole lecture on how to pose somebody, but I think that’s fundamentally the problem with why people don’t like existing in photographs.

If someone once took a quick snap of you and caught you with your mouth half open as your about to say something, or you’re just caught you unawares, and you didn’t like the result, then that can lead to you thinking you don’t take a ‘good’ photo. Rarely is that true.

I know people say they like the photographs where they weren’t expecting it to be taken, and yes you get those lucky ones, and that’s great. But my point here is, it sows the seed that you look awful in photographs. Whereas in reality, you don’t, you just need someone to take a little bit of time, allow you to get settled, and then deploy good lighting, good posing, and knowledge of how to get the best from the camera.

When we’re rushing, we don’t tend to do that. At home, we have endless pictures of my backside, or other bad angles, because my husband was rushing to take the photograph and I hadn’t quite gotten settled. But that’s replicated in lots of other people’s family photographs.

How do the habits from your childhood influence the photos you take today?

So going back to the main point about what habits do you still have from childhood, I want to sow the idea that you take photographs of key memory moments, like birthdays, holidays and first days at school, just because everybody should exist in photographs, the whole family.

It’s very easy to be the one taking the photographs all the time. I fell into that trap recenlty, it was my husband’s nan’s birthday, she was 99 years old. And I did the majority of the (phone) photography until my husband swapped with me and took the camera and included me in some of the photographs because I’m still part of the family, but because I hadn’t taken a tripod with me, I couldn’t do it on timer. And I probably wouldn’t do it on time either because with a big group, I think there were 10 of us, it’s nearly impossible to get everybody looking at the camera at the same time, even with a countdown. Or there was two dogs as well, which were distracting everybody.

My top tip is to ignore the distractions and keep looking/smiling at the camera, and let the person taking the photo to encourage the ‘naughty’ ones to look in the right direction 🙂 Or blow a raspberry …

Digital is your friend

You do have to take lots of different photographs to get the one that captures that memory. And with digital, it’s fantastic because we can do that. Obviously, there is a cost attached to it, but we don’t see it in the same way that we saw it when we had to get a film processed and then prints taken from that. Today, it’s much easier to take a photograph, it’s much easier to keep family traditions about having a photographic record of key moments in your family life. And I think if you associate that with happy times, you’re more likely to do it.

If you constantly feel awkward in photographs, then you’re not going to want to be in them. And I understand that, but I would just ask you to make the effort. I kept saying when I was taking the family photographs, “You’ll thank me in a few years’ time because you’ll want to look back at these memories.”

Do you have any occasions that you must get the camera out for? Drop me a comment on social media @photographsinashoebox.

Don’t know where to start photographing your little one?

Pop your details here, and I’ll send you my one-page checklist of photo ideas that you can achieve with just your smartphone camera!