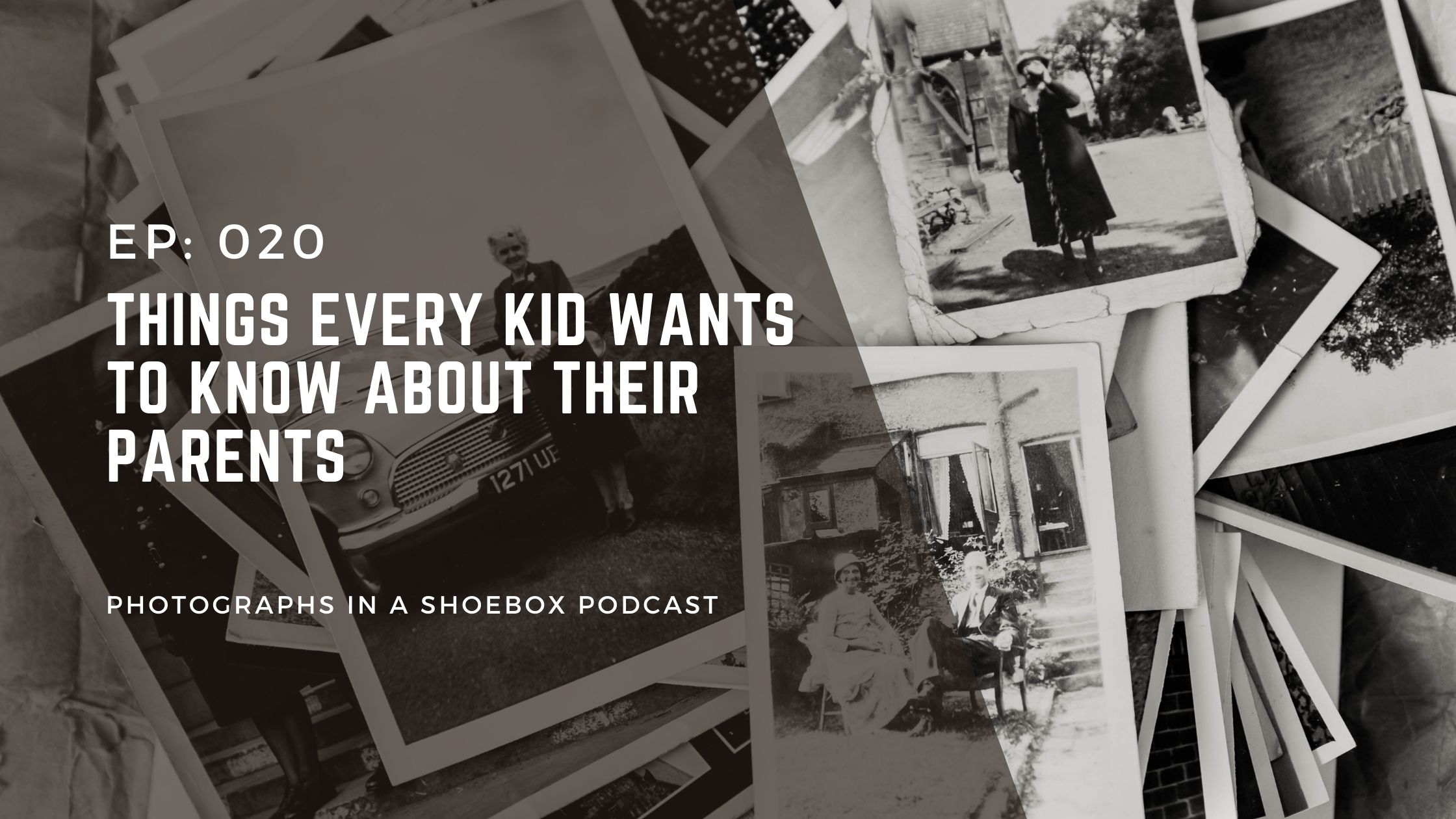 Ep 020 – Things Every Kid Wants to Know About Their Parents

Listen Here to Things Every Kid Wants to Know About Their Parents:

Things every kid wants to know about their parents

Inspired by the article ’30 things my kids should know about me’, which you can read here.

Transcription of things every kid wants to know about their parents

Sue: (00:04)
Hello, and welcome to the Photographs in a Shoebox podcast with me, Sue Kennedy. This podcast is all about helping and inspiring you to tell your family’s story in pictures with a gentle reminder to print the photographs you love.

Sue: (00:23)
So today I wanted to talk about an interesting blog that I came across that was titled 30 Things My Kids Should Know About Me, and it was all about life before kids. And actually, it led me to a revamped article and I’ll share the link in the show notes. But what I actually thought was brilliant about this was it was encouraging you to write about your life before motherhood, which I kind of wish I had done when I was pregnant rather than as a mother of a pre-teenager. So I think it will be fascinating for children to look back on when they’re older because I think also it’s great for you as well as the mother when you’re lost in the whole motherhood world and the life before is a distant dream. And things do change as you get older, things that you love doing as a girl in your 20s, I think changes as you get older and different things have more of an appeal.

Sue: (01:56)
I know it’s different for all of us. In the studio, I’ll meet ladies expecting their first baby who well, both parents to be honest, and they are determined that their baby won’t know what an iPad is or what chocolate is or anything like that before X age. And then equally, I’ll meet parents who have maybe had three children already, and they’re all quite young still. And they just give you that knowing smile. They started off that way, but they’ve realised the benefits of iPads coming useful sometimes. And they acknowledge that the ideals get replaced by realism and I’m not being judgemental here. It’s just, we all end up compromising in some form. And I think you have to look back on it with humour because we’ve all done it, we’ve all sworn we’re not going to be the parent that does X, Y, Z. And then you find yourself doing X, Y, Z going, oh, no, I didn’t want to be that parent, but you have to roll with it because you just go bonkers otherwise.

Sue: (03:22)
So the other thing I loved about this project was because it’s a way for you as a mother to exist in photographs. It’s another way to tell your story. This sort of was brought home to me. In the summer we visited London and we went to a place called Leadenhall Market. It’s somewhere that my husband and I both used to go to after work for a drink. There’s a couple of pubs there. Wasn’t something we did together, because we didn’t know each other in those days. But it just one of those places where anyone that worked in the city of London would head to after work, not every night, obviously just, once a month maybe. And it was just slightly amusing watching my daughter slightly bewildered, listening to us reminisce those days.

Sue: (04:22)
And I think she was more so because of me speaking of the days when I could go out drinking after work, because she’s only ever known me as a mother, obviously. So I think they forget that you had a life before them. And that’s what this whole project was about, this blog article was about was listing all the things that your kids probably don’t know about you. And she makes some excellent suggestions on what you can include and even includes some graphics so that you can go on to create an album.

Sue: (05:08)
But it’s things like random facts, the passions that you had, maybe an embarrassing moment, things that made you happy in your 20s that maybe that’s changed. Maybe it hasn’t. I don’t know. The hardest part of growing up, your five greatest accomplishments, significant memories from your childhood. They can all get lost in the day-to-day job of parenting. So I thought that was a wonderful, an alternative way to communicating your memories. And plus as well as mothers, we often don’t exist in photographs. We’re usually taking the photograph, we’re recording their childhood for them. And we may not feel like being in the photographs, but trust me, your children don’t care. They want to remember you and they are not judgemental about whether you had makeup on, whether you were a size bigger than you really wanted to be.

Sue: (06:23)
You’re just mum or mummy. And it’s nice to remember that. I think when you look back over the years, you want some of the photographs to include you, not just be of dad with the kids or just the kids on their own. There needs to be a balance there, shall we say? So anyway, I would love to know your thoughts. So please drop me a comment on social media @photographsinashoebox, and that’s all for this episode. So don’t forget to subscribe wherever you are listening so that you never miss an episode. And thank you for joining me today. Bye for now.