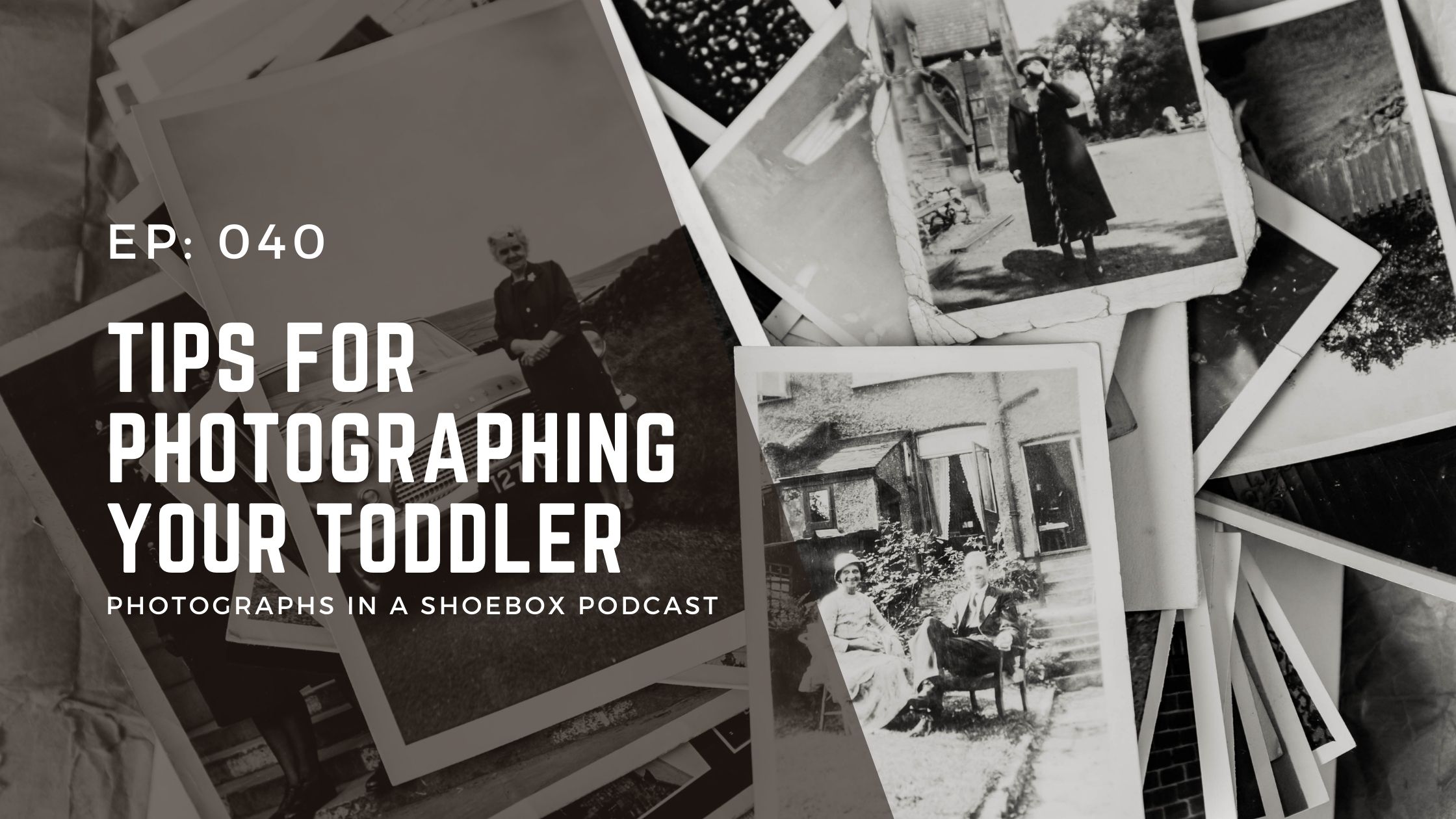 In this episode, I cover the ‘how’ and ‘what to wear’ elements as these tend to be at the forefront of a parent’s mind when photographing their own toddler.

This is a phase of childhood which is both unpredictable and busy, which is why you should always be camera ready to capture that beautiful memory that’ll make you smile in 20 years time.

I love to hear your thoughts and experiences of photographing your own toddler, let me know under the episode post @photographsinashoebox or below.

I’m going to cover this from two angles:

How to get great photos of your toddler

First, let’s focus on how you get great photographs of your fast moving toddler. I tend to find in the studio that the toddler photoshoots are always lively, and slightly chaotic. But then of course it’s slightly different when you’re photographing your own child.

I’ve got a slight advantage for maybe five minutes of being that new person, not quite a stranger, but they’re not used to me taking photographs of them regularly unlike their parents, so they are shy for a minute or two.

My advice in this podcast is, is based more on my experience as a parent photographing my own toddler.

No sense of direction

The first thing I would say is generally at this age a child will not take any direction. So my best advice is don’t even try, by all means, try and steer it, but just accept that it may not go to plan. So just don’t put yourself under pressure to get that perfect shot.

There’s a brilliant quote by Jerry Sinfield. and he says:

“Having a two year old is like having a blender without a lid.”

I think that says it all really.

When you’re photographing your toddler, remember to capture the everyday moments too. Forget the perfect sitting shot where they’re smiling at the camera, but you’re probably still going surprise yourself with the number of photographs you can get that you will like ,where they’re doing something.

You’re gonna have to take a lot of photographs to get the ones that you absolutely love. That’s pretty much like any photoshoot that I would do. I will take a lot of photographs. I might take 200 photographs in a session, but only show the parents 30 to 40. And it’s exactly the same for you at home, whether you’re using, your own camera or your smartphone, you’re going take a lots and you’ve got to be willing to weed them out. Otherwise, you’re going to run out of storage.

I think there is a place for everyday moments, you know, when they’re playing in their sandpit or they’re having a water fight or something like that.

Still great images to capture because it represents what they love doing at that age. Something I would try and avoid is, is when they’re running, don’t run too, dancing is better than running 🙂 It’s best in my experience, not to start a game of chase, but to use either props or a little game that will encourage, a moment of stillness.

You might have to give them a stick and ask them to bake an imaginery cake with a few leaves and a few stones that are part of the ingredients and get them to mix it up, or they might be a potential wizard and you can use the stick to cast to spell, just for fun. But also things like a ride on car or if they’ve got little chairs, they can be a great way of just getting that moment of stillness so that you can take the photograph.

Something else I find that works well is, bubbles, but I tend to leave that until I’ve finished photographing them because it can go two ways. They can start running after the bubbles, or want to blow bubbles themselves. Then it gets messy.

Holding a balloon can be quite a fun way of engaging them because you only need a moment to get that photograph that you’re gonna love forever.

You also have to be watching for when they’re bored and frustrated and be willing to take a break. Sometimes they’ll just want to run and burn some energy, so let them, and then reengage them. It’s just the way it is with this age group.

Another tactic might be to get them interested in the camera. And I don’t mean interested in seeing the photographs that you’ve taken of them or taking their own, but maybe pretending Teddy is taking the photograph or if they’re a little bit older, I sometimes say, “you know, there’s a little man inside my lens and he’s waving at you. Can you see him?” And it’ll just make them stop and look for a moment.

If you’re using a traditional camera rather than your smartphone, sometimes you get like a rainbow effect in the lens and I literally just say, can you see the rainbow in my camera? And they will often take a closer look.

That’s all my tips on the ‘how; side of things, other than to be fast and photograph regularly, because then you will gradually build up that collection of photographs.

Best clothes for a toddler photoshoot

I’m thinking timeless with these tips. I personally want photos on the wall that won’t date, but, you know, you may not care that may not be your vibe at home. You do you.

I always take it. It may not be perfect. And if I get the opportunity, to make it better, I will.

Whenever I’m photographing a toddler, I prefer to get the photo and then refine it. I don’t fuss. I just take the shot and then if they’re still happy to stay there, I might refine it then, which is why it’s so important to have clothes that are easy, because you know, by the time you’ve adjusted a collar, they can be on the move again. And you may have lost the opportunity to get that photo.

I think that really is the essence of it all, they move fast at this stage of life. So you have to as well, you notice the difference or I notice the difference when I’m photographing older children, and they stay where you ask them to stay and do what you ask them to do. And it’s enjoyable, but it throws me a little bit because I’m so used to, navigating toddlers or young children who won’t necessarily take direction. Not until they’re about four or five years old.

As a parent just don’t get stressed if they’re not quite doing what you ask because they don’t, all children are the same in that sense. And I think the essence of any toddler photoshoot is to be quick because it will keep it enjoyable for the child. And when I say, photoshoot, you know, you might only be taking their photograph for a minute or two. But you want to be able to do that regularly so that you build a story of their childhood.

I’d love to hear your thoughts and experiences of photographing your own toddler. I’m sure there’s a funny story or two in there in the comments below.

If you’d like me to photograph your fast-moving toddler then all the details of my child photography sessions are here.

Read my article Preparing for your Toddlers Photoshoot for more tips.