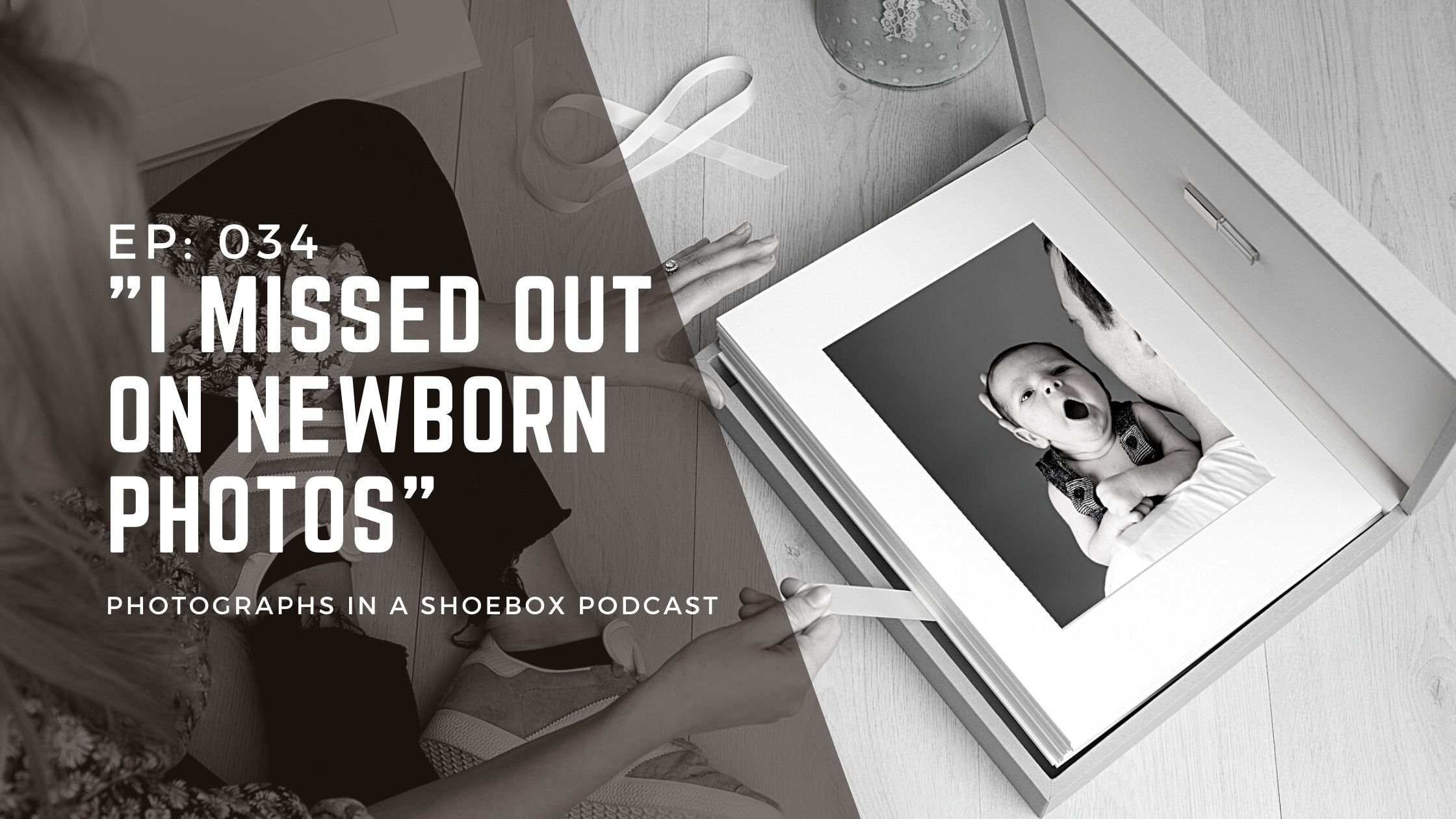 Recently I have this phrase a lot from people enquiring about professional baby photos. The message always starts with “I missed out on newborn photos” and generally goes on to give a perfectly valid reason for not getting around with it. Can I just say … you’re not alone.

When my daughter was born it took me a month to get back into my own studio with her, and I know from photographing a lot of 2 month olds that’s quite common.

Listen to the full episode here:

Lots of people miss out on the newborn phase for various reasons. Babies may stay in the hospital for longer than you thought. You may find that you just enjoy those newborn moments. Then before you know it, the time has flown by and they’re already two months old. Or maybe your baby had terrible reflux and they were just thoroughly miserable with it.

Do you know what? Sometimes it is just better to wait.

Don’t get me wrong, I get the whole wanting the newborn photographs thing, but equally, I hate the pressure that it’s putting on new mums, particularly first time mums.

Let’s be honest, there are other opportunities to capture some baby memories.

I think that’s one of the reasons why taking photographs of a four month old works well because they’re starting to do a little bit more. They’re not sleeping as much. They’re lifting their head, and they’re just starting to interact with the world.

I won’t go into the different ages in too much detail, because on the blog I have covered what ages are best for photographs.

Benefits of Photographing an Older Baby

If you were to ask me, what’s my personal favourite age to photograph, I would say around the sixth to eight month mark.

Typically, your baby is sitting, and it feels like they’re laughing at your jokes. They’re interacting with you. They will respond to your silly faces or your daft dancing or whatever it is you do, and they’re also at that gorgeous squishy stage. And more importantly, they’re not moving. Well, they’re not crawling yet hopefully.

They kind of stay where you put them, which is quite an advantage for taking photographs 🙂

But I think because they are so playful and joyful at that age and the fact that they can’t escape from you too quickly, they’re literally just sitting there, it is a fun age to photograph.

The other advantage as well is you can probably do an outfit change or two. But again, with that, I always say, if you know your baby absolutely hates being changed, do not change them. It’s just not worth it.

Another option, of course, if you’ve missed out newborn photographs is you can go the whole hog and record baby’s first year, which would typically start when they’re four months old and lifting their head, and then capture the eight month stage when they’re sitting, and then one year when they’re standing.

I know that initially, people will go, “Ooh, I can’t do three photoshoots,” but it’s actually better value just to spread it out. I tend to find people spend the same amount, whether they’re doing three sessions as part of baby’s first year or just a one-off. It’s down to your preference.

With the three portrait sessions, I think the gallery wall that you can create is going to be so more varied because of all the different ages and expressions. The biggest changes happen in that first year. It’s worth it, but then I’m biased.

I also photograph a lot of 18 months old as well that have missed out on the whole first year thing.

Anyway, that’s how it is.

Life is busy and we just fit it in when we can. I know from talking to mums that they think they’re the only one that’s failed at getting baby photos organised in a timely manner because they say that to me.

Camera phones do a great job, but I know that the skill of the operator is what determines the results, but you can still get plenty of photographs that you love from that. They are your memories. It doesn’t matter if there’s a bit of movement in them. Sometimes that adds to the atmosphere of the photograph.

Let me just summarise my thoughts on this feeling that you’ve missed out if you’ve not had newborn photographs.

I would love to know how you get on @photographsinashoebox